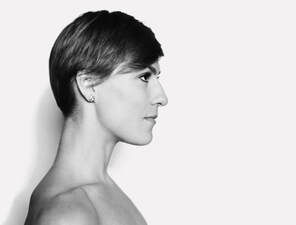 Anneliese Varaldiev
​Flutist, soprano and sound artist Alice Teyssier brings “something new, something fresh, but also something uncommonly beautiful” (UT San Diego) to her performances. Hailed as possessing an "ethereal and riveting" (The Flute View) voice with “unusual depth” (Badische Zeitung), Alice’s mission is to share lesser-known masterpieces and develop a rich and vibrant repertoire that reflects our era. ​

​“An arresting soprano, in all senses” (LA Times), Alice has appeared as a soloist with the San Diego Symphony, International Contemporary Ensemble, Talea Ensemble, the San Francisco New Music Players, Oberlin Contemporary Music Ensemble, the 21st Century Consort, Bourbon Baroque and the Bach Collegium San Diego, amongst others. She is a regular guest to the Monday Evening Concerts series, where she has premiered numerous works—from Salvatore Sciarrino to Cassandra Miller. Alice resumes her role as "a virtuosic soloist" (SF Chronicle) this season with Bach Collegium San Diego in a program of French Baroque gems and with the International Contemporary Ensemble in Dai Fujikura's 'Silence Seeking Solace'. She will also be featured in Tyshawn Sorey's 'Perle Noire' at the Théâtre du Chatelet and in George Lewis' 'p. multitudinis' at the NYU Skirball Center. With Michael Weyandt and Bradley Scott Rosen, she composes and performs as The Atelier, a uniquely organized music-image-movement ensemble, which was featured on the 2016 Resonant Bodies Festival in New York.

In 2007, Alice was “haunting” in the US premiere of Olga Neuwirth’s opera 'Lost Highway', after the David Lynch film, at Miller Theater; she has since presented many modern operas by composers such as Anthony Davis, Esteban Insinger, Pauline Oliveros and IONE and Viktor Ullman and continues to forge new ways of creating and developing the operatic stage with her collaborators. She has been instrumental in creating roles in Ashley Fure's 'Force of Things', previewed at the 2016 Darmstadt Summer Courses and premiered at Peak Performances in Montclair, NJ, and Clara Latham's 'Talking Cure' (Anna O.), presented in its premiere concert version at Roulette Intermedium in summer 2018.

Connecting her work to the world and people of all walks of life is important to Alice, and she devotes much of her time in the educational and engagement realm. As a soloist and with ICE, she has given residencies for composers and performers of new music at such universities as Brown, Harvard, Huddersfield, Leeds, Michigan, SUNY- Buffalo and Stanford. Besides working with college and graduate students, Alice has made a mission of engaging younger children in the creative process; her work with OpenICE and EntICE initiatives has borne fruit with the Youth Orchestra Los Angeles, The People's Music School in Chicago, USDAN, the San Francisco Symphony Youth Orchestra and UpBeat NYC (Bronx).

Born in Australia of French parents, Alice has lived all around the United States, France and Germany and continues to perform on all continents. She has earned degrees from the Oberlin Conservatory of Music (BM, MM Opera Theater), the Conservatoire de Strasbourg (Specialization Diploma) and holds a Doctorate of Musical Arts from the University of California-San Diego. Since 2017, she serves as Clinical Assistant Professor of Performance in the Music Department of New York University's Faculty of Arts and Science. Alice lives in Brooklyn with her husband Bradley and their son Lucien.